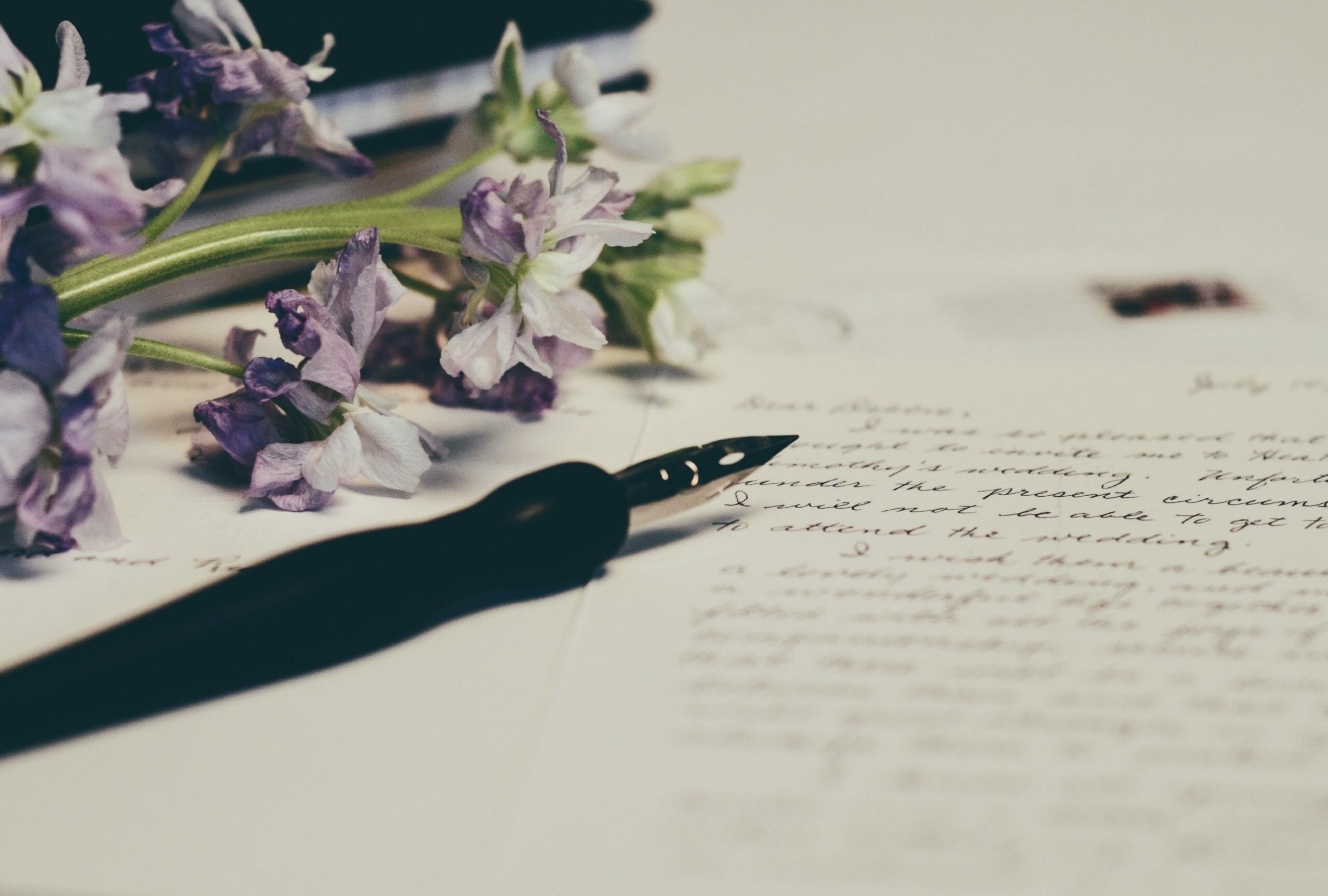 Who ever said that contracts must be boring? That contracts need to be black and white, long, complex and full of plain text? No one. That’s how we’re just taught and that’s what we get used to and socialize with. Have you ever noticed that when you start writing contract text, you start using weird words that you would never otherwise use. Words that were used perhaps a hundred or two hundred years ago, and probably not in everyday use even then. Why should they be used in contracts then?

Means of effective and engaging communication, such as playing with text, visuals, and illustrations, are used everywhere in the world around us, but the same practices do not reach the law. Black text on a white background, small font size and small line spacing. A bunch of papers that make you yawn and wish that the issue had already been taken off the agenda to get to the point itself. This is how contracts still are.

It is quite ironic that the most important and even the best deals culminate in these boring and annoying papers. The fun of a good partnership or sale ends short when you have to get things on paper. “Uh, we still need to do the contract. Let’s get it done quickly so we can focus on more important things.” Often, your colleague or customer may also postpone and postpone getting you involved in making the deal because they don’t want to “make things difficult”.

The boredom and complexity of contracts also mean that contracts remain in the archives after signing and are only excavated in the event of a dispute. Contracts are not everyday tools that would live in the daily lives of people and business. All those sentences formulated and negotiated with devotion will be forgotten.

However, it doesn’t have to be like this. Contracts can also be made engaging and taken as an important part of the brand and customer experience. Contracts can build trust, act as good and effective means of communication, and help people reach their goals. However, this requires a change in how contracts are created.

Language has so far been your most important tool as a lawyer. That is likely to continue to be the case, as law is, above all, communication. However, you need to learn a new legal language in order to better serve people. Jurisprudence, like contracts, is made for people for their needs, so the language needs to be understandable and user-friendly.

User-friendly language is the sum of many things. It means writing in readable and understandable language from the reader’s perspective. So the focus is on the reader, not on you or your expertise. This requires that you define the user of the contracts. Who will read and use the contract and for what purpose. What is the main message of the contract.

When formulating a user-friendly contract, take into account the content of the contract as well as the vocabulary and language structure you use.

Using user-friendly language requires expertise and courage. It’s also hard – doing complex is easy and doing simple is hard. Fortunately, practice makes perfect here as well. In order to use clear and understandable language, the idea itself must be clear. What do you want to say? What information does the contract user need and what language does she understand? In fact, I can say that I have done a lot of contracts, which idea was not not entirely clear to myself. Consequently, it is probably not that surprising that the end result was not clear and only caused more ambiguity over time. You shouldn’t rush into content until the groundwork, which is often thinking !, is done well.

With the contract structure, even small improvements work wonders! Have you noticed that the clauses that are important to the lawyer and that are often negotiated for the longest time are not that important to contract users. You can take this into account in the contract structure by placing the most important things for the user at the beginning of the contract. At least in everyday life, the user does not even have to always read the contract in its entirety in order to find out the information that is important to her. Often the important and useful content include commercial terms, such as price and schedules. Limitation of liability and indemnity, on the other hand, are clearly legal content that become relevant only in case of problems or disputes, in which case their place is at the end of the contract.

Part of the designing of the contract structure is also to consider which content should be included in the main contract and which content in the annexes. This is called contract architecture and you can act as chief architect! It is easier for the user if the content on the same subject can be found in the same place, ie in the same document and combined in the same paragraph. If a user has to read several different documents with duplicate content at the same time, it becomes difficult. The situation is exacerbated if there is no clear priority for the different documents, ie which document takes precedence.

Phrase titles and a clear table of contents are part of a good contract structure and help the user to perceive content that is relevant to her. You will notice the importance of clear headings from the table of content, ie instead of individual word headings it is better to use longer sentence headings to describe the content of the clauses in more detail. This makes it easier for the user to navigate the contract structure and find content of interest to her faster.

“A picture speaks more than a thousand words” is a worn but apt saying to justify the use of visualizations in contracts. I have often come across misconceptions about legal design that it is just visualization and that visualization would mean “pretty papers” i.e. the decoration of documents. That is not what it is. Of course, aesthetic choices are important for the user experience, but visualization aims to increase the user’s understanding of the content. Visualization thus aims to make content understandable and usable.

General tips for visualization are that you should only use it when it helps with understanding and supports your communicative goal. Also, in terms of visualization, you should first think about what you want to present and only then how to present it. You can use the elevator speech test to clarify the content to be visualized: include only the content you need to explain it in 30 seconds. Another good practical tip is to formulate what you want to present into one sentence first and use this as the title of the visualization. This helps to frame the making of visualization, which can often seem too broad, especially at the beginning.

In visualizations, going for simple is the best option, but often the most difficult. When making a visualization, it is a good idea to use established expressions because users can read them better. It’s not about showcasing your creativity, it’s about increasing user understanding! So avoid visual gimmicks that interfere with clarity. During the process, it’s also a good idea to constantly test the visualization with outsiders to see if others understand what you’re doing and what message you’re conveying.

Use personal and conversational style

As lawyers, we have been taught to speak passively and eradicate personality and persons from our language. Fact-based, seriousness and dry style have been the guarantee of reliability and authority for centuries. However, the old-fashioned style is no longer effective and does not have the desired impact. At times, I wonder how long black and white boring contracts have held their ground, even though the style of communication and user experiences around them have changed so much. The flood of information is so enormous that it has been necessary to develop appealing colorful communication, and the same must be applied to contracts if you want to make them more user-friendly and simply better. 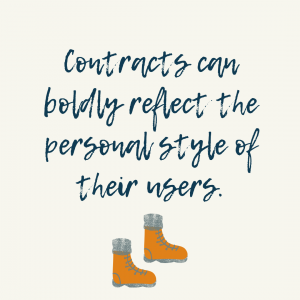 So feel free to use a personal style. Contract users, different people, and organizations are all different from each other, so their contracts can also boldly reflect their own style. It makes people interested and committed.

In contracts, it is also often better to use a conversational style like “you” and “we” so that the user feels that she is being talked to and that things are about her. The content then feels much more personal and the message is more impactful. Dare to try different styles and you’ll see what works. Not everything always works, and then you can change it to find the style that suits you and your user base.

Designing contracts is so fun! Who would have thought that even the work of a lawyer can be designed into a creative profession where one can use a lot of different skills. There is no need to hang on to existing patterns and ways of doing things just because it has always been like that. There is permission and downright obligation to develop new ways to serve contract users. You can get started with very little – remember, something simple first. The next time you open a blank Word document with the intention of starting to write a contract, think about which of these tips you can take for experimentation.

Let me know about your experiences, comment here below or post a message, I’m always happy to hear from you!

Hi, I'm Hannele. I am an ex-corporate lawyer, legal designer, pioneer in legal tech, serial entrepreneur and blogger.
I am the founder and teacher in Lawyers Design School. I'm here to teach you new skills and mindset of legal design to thrive in the future of law.

Based in Helsinki, Finland, I founded the Lawyers Design School.
My name is Hannele Korhonen.
The Lawyers Design School provides online legal design training, globally. We teach lawyers and legal teams better ways to provide legal services through legal design. Using empathy, we provide assistance and solutions customers can understand. Gone are the days of intimidating legal offices, complex legal letters and a one size fits all approach to law.
Your customers are demanding it. Are you ready?

Sign up to my newsletter and stay up to date with news and curated content around legal design.